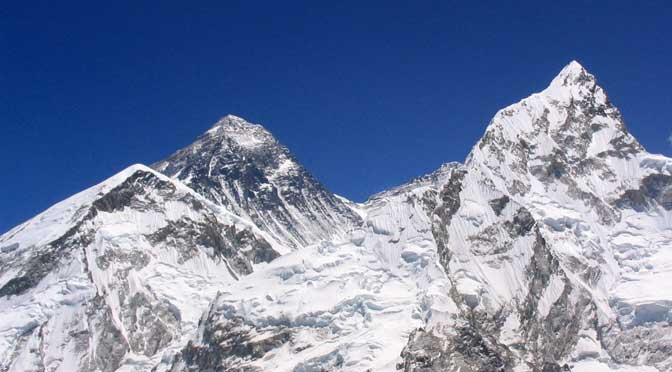 How high is Mount Everest

How high is Everest? It is important to know the height of highest peak of the world. Explorer, researchers and adventure travelers frequently ask; how high is EBC? It is 5364 meters above sea level. How high is Mt Everest in meters, feet, miles? It is 5.5 miles, 29,035 feet. & 8,848 meters above sea level. Mount Everest is the highest mountain peak in the world. It is located in the Himalayas in Nepal. The peak is 8848 meters in height above the sea level.

World highest paek is a very well known trekking point for the mountaineering enthusiasts. Each year, several capable mountaineers and climbers hire professional guides also known as Sherpa’s to climb to the top of the peak of Mt Everest.

The climbing routes
There are two climbing routes to reach its summit. One of them is from the Southeast part of Nepal which is also known as the standard route. This route is mostly followed by the capable mountaineers, especially the ones who are climbing the mountain peak for the first time.

The other climbing route is from the North of Tibet which is not a common path for the climbers. Some introductory trip to Everest region listed here those are helpful to know more about.

How high is Mount Everest Himalayas

Dangers associated with the climbing of the mountain peak of Everest

There are such dangers present for all the mountaineers and the climbers like the rough weather, altitude sickness, wind, low oxygen supply, extreme cold and other hazards like the ice fall and the avalanches. While most climbers prefer using the bottled oxygen for climbing the peak, there are also many such climbers who have achieved the feet of climbing to the peak without any supplemental oxygen en-rooted the peak.

The South base camp receives its supplies by the porters and the Sherpa’s and animals like yaks. The north base camp on the other hand receives their supplies with the help of the vehicle access during the summer months. The climbers rest at the base camps before climbing so that they get accustomed to the weather and the environment of the Everest.

Resting in the base camp for a few days also help the mountaineers in reducing their risk of falling ill with altitude sickness. If you need more information about its height, packages, cost fell free to contact us.